In 2021 people in the Diocese of Nova Scotia and Prince Edward Island were the most generous donors to the first Say Yes! to Kids campaign and raised more money than any other diocese in Canada. We also submitted more applications and received more funding than any other Diocese: $61,650 for 10 projects. It probably won't surprise you to learn that we have more teams in the 2022 campaign than any other Diocese.

The Diocese of Nova Scotia and Prince Edward Island is playing a leadership role in the Say Yes! to Kids movement. We are helping to change the conversation about funding for youth ministry and outreach at the local, regional, and national levels. For every $10 donated to the Diocese of NS & PEI teams, $2 will support our diocesan Community Roots Day Camp which is building capacity for youth ministry leadership in communities across the Diocese. That's a win-win for everyone!

We are in the home stretch of this year's campaign, and I want to encourage everyone in our diocese to give generously to our Diocesan Nova Scotia & Prince Edward Island Say Yes! to Kids teams. Every gift, large or small, will help to grow a brighter future for young people, today. You can click on the title project listed below to donate online to one or more of these teams. (If you prefer to give by cheque, you can follow the instructions below.) 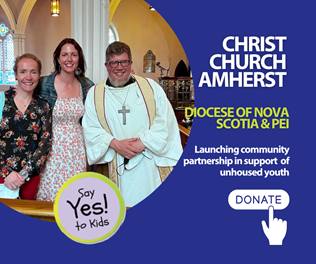 Thank you for your generosity!

P.S. You can also mail a cheque payable to the Anglican Foundation of Canada, with the name of the team you wish to support in the memo line to: 80 Hayden Street, Toronto, ON, M4Y 3G2. Or write "Nova Scotia & PEI" in the memo line and your donation will be shared with all four teams.